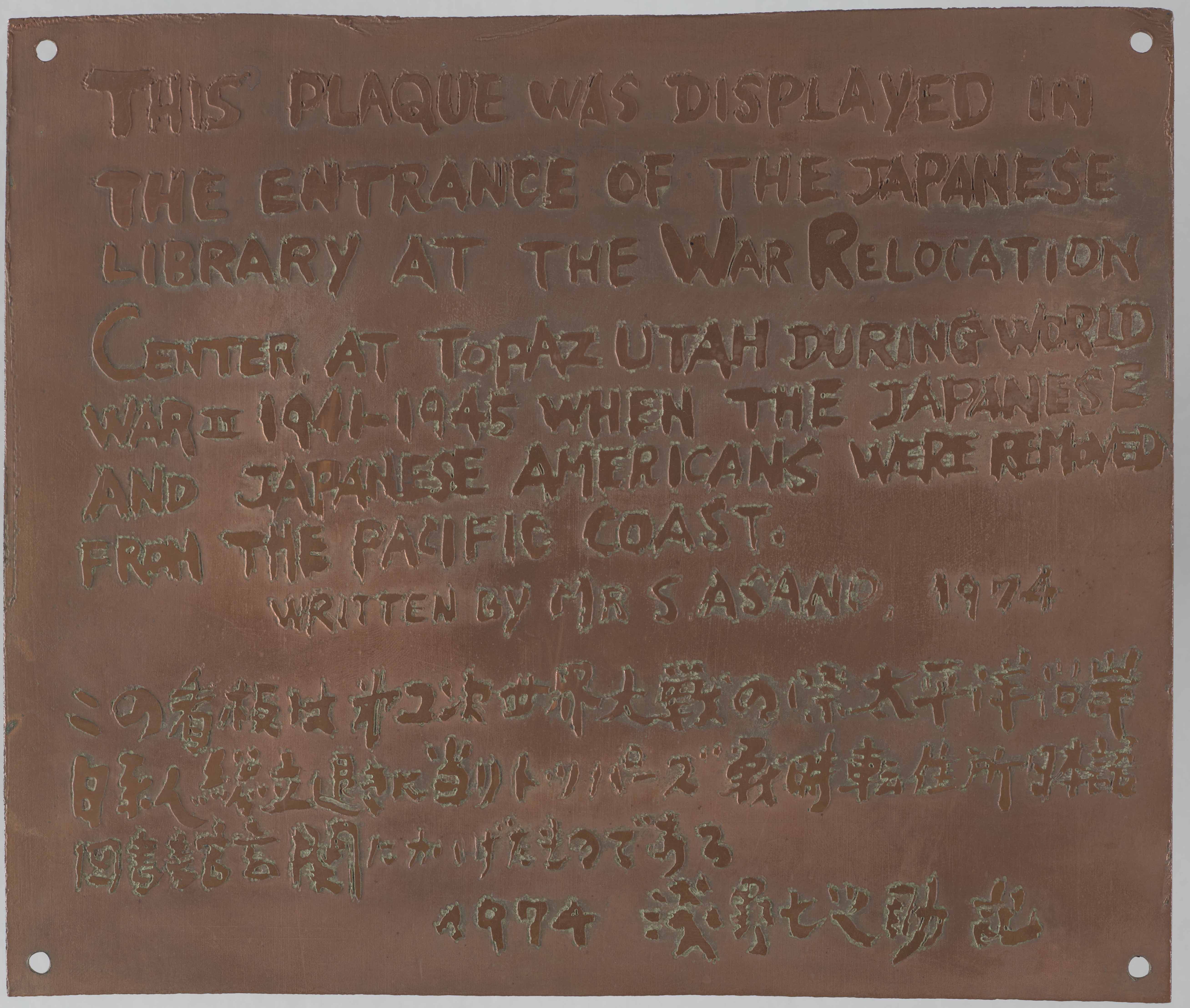 Sign carved on a native cedar limb by a Japanese interned at the Topaz Relocation Center, Utah (left) and copper plaque inscribed by Shichinosuke Asano: “This plaque was displayed in the entrance of the Japanese Library at the War Relocation Center, at Topaz Utah during World War II, 1941-1945 when the Japanese and Japanese Americans were removed from the Pacific Coast. Written by Mr. S. Asano, 1974.”

Columbia University's C.V. Starr East Asian Library owns many rare and unique materials, including rare books, and archives in Chinese, Japanese, Korean, Tibetan, and Western languages, as well as non-print collections. These non-circulating materials are available for use, by appointment, in our Special Collections Reading Room. Please visit the Starr Library website for for further details on making appointments and requesting materials for use. 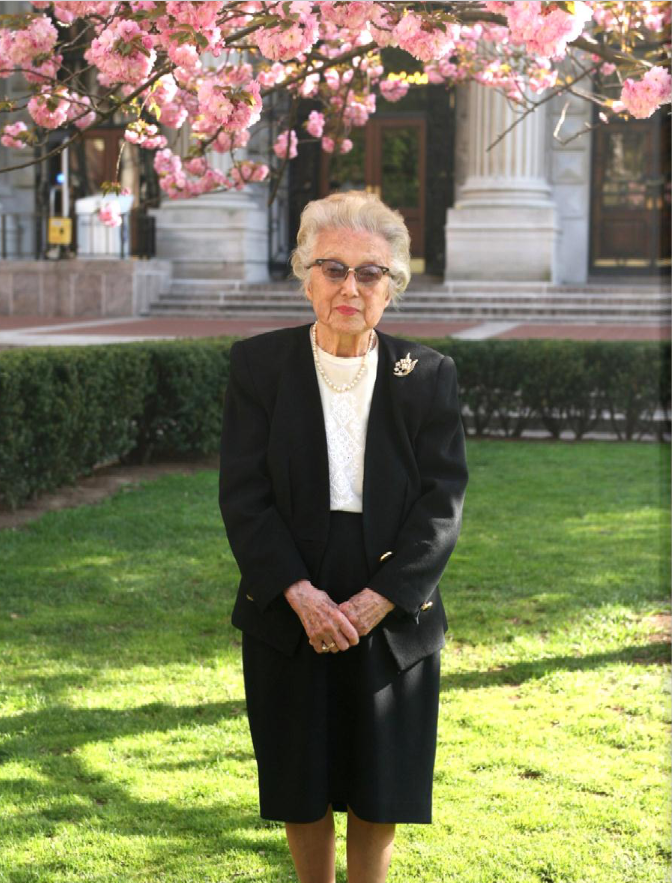 Born in 1913 in San Francisco, California, Kai's first vocation was as a concert pianist. She received the Beethoven Prize at the Piano Playing Tournament in San Francisco in 1927 at the age of only fourteen, and won first prize at the Music Concourse in Japan in 1932. In 1937, she participated in the Third International Chopin Piano Competition in Warsaw, Poland, representing Japan. She was still living in San Francisco, continuing her piano studies, at the time of the attack on Pearl Harbor on December 7, 1941. She was forcibly evacuated to the Central Utah War Relocation Center internment camp (otherwise known as Topaz) near Delta, Utah. During her time there, Kai taught piano lessons and performed concerts. She was discharged in 1943 by securing release to work for John Embree, an anthropologist specializing in Japanese studies. Kai then moved to Manhattan in 1944, where she began working at the C. V. Starr East Asian Library at Columbia University.

Kai's impact on Japanese studies and librarianship goes beyonds the confines of Columbia University. Following the end of World War II, Kai spent two months aiding the Library of Congress in processing books confiscated from libraries in Japan. Many unwanted or duplicate materials found there would be taken by Kai and added to the Japanese Collection at Columbia University's East Asian Library. Kai also trained many Japanese librarians from Japan during her time at Columbia, including members from the National Diet Library and the Waseda University Library. In 1995, the Japanese Government conferred her with the Order of the Precious Crown, Wisteria for her efforts to enhance cultural exchange. Kai also completed a number of publications, most noteworthy her translation of The Diary of a Japanese Innkeeper's Daughter, published in No. 36 of the Cornell University East Asia Papers in 1984, and her post-retirement works, The David Eugene Smith Collection of Works in Japanese on Japanese Mathematics in 1986 and Japanese Woodblock Printed Books and other Unique Japanese Materials at Columbia University in 1996. Following these publications, Kai worked on her extensive book of history of Columbia University's East Asian Library's Japanese Collections until the end of her life. She passed away at the age of 98 on December 10, 2011. There currently stands a plaque in the reading room of the Starr East Asian Library, dedicated to her hard work and service, erected following her retirement in 1983. There is also an unmarked cherry blossom tree in front of Kent Hall planted in her honor. 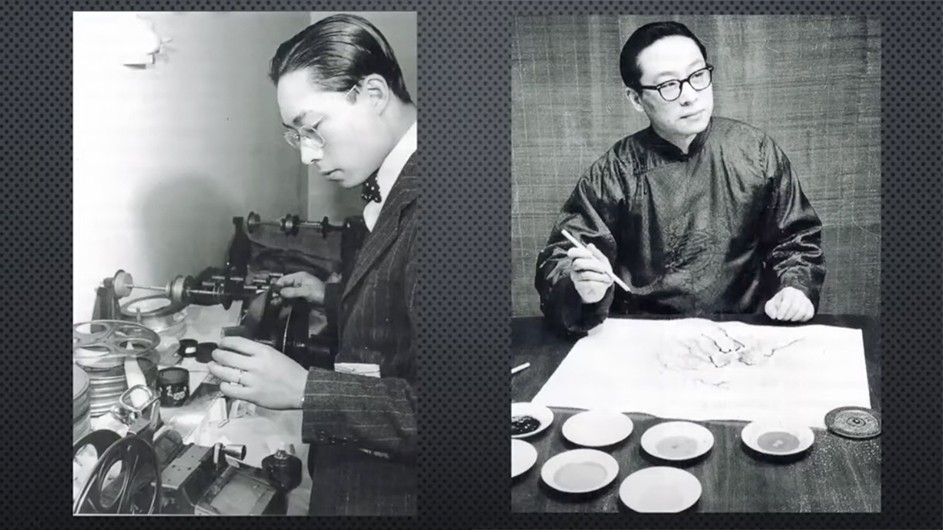 Wan-go H.C. Weng (Wade-Giles: Weng Wan-go, Weng Wango; Pinyin: Weng Wange; Chinese: 翁万戈, 翁萬戈; also known as: Weng, Hsing Ching Wan-go; Weng, Hsing Ching; Weng Xingqing; 翁兴庆, 翁興慶) was born in 1918, Shanghai, China. He is the fifth-generation descendant of Weng Tonghe (翁同龢), who was a Chinese scholar in the Qing dynasty. Weng Wango attended Shanghai Jiaotong University (上海交通大学) and studied engineering. In 1938, he began studying at Purdue University and received his master degree in engineering. He later also attended University of Wisconsin-Madison and studied art. In 1980s, he became the President of the China Institute (华美协进社). He is a known art historian, collector, and filmmaker. In 2020, he died at the age of 102, in Lyme, New Hampshire.

photo: Wango Weng selecting film footage circa 1947, on the left, and demonstrating the art of Chinese landscape painting circa 1946, on the right.

Ta-Chun Hsu (Wade-Giles: Hsu, Ta-Chun; Pinyin: Xu, Dachun; Chinese: 徐大春; also known as T.C. Hsu) was born in Beijing, 1918. He was the son of Yang Yu-Hsuen (楊毓璇) and Hsu Singloh (徐新六), and the brother of Irene Hsu (Hsu Ta-Ching, 徐大慶) and Vivian Hsu Jee (徐嘉汝). He attended the University of Shanghai from 1936 to 1938. In 1938, C.V. Starr brought Hsu to America to attend college. In 1942, T.C. Hsu received his Bachelor’s degree in economics from Haverford College and his Masters Degree at Columbia University School of Journalism in 1944. He later studied insurance at the Golden Gate College in San Francisco, California. He began his journalism career at the New York office of the Chinese Information Service in 1944. He later returned to Shanghai two years later and worked at the Shanghai Evening Post and Mercury. In 1947, he joined the staff of the Shanghai Commercial and Savings Bank. In 1949, he began working for the Hong Kong office of the American International companies and then in the San Francisco office working for the Marine Claims Department of American International Marine Agency, Inc. and later with the Underwriting Department of the American International Underwriters, Inc. from 1951 to 1964. In 1964, Hsu moved to New York and worked directly with Mr. Starr on various projects at the Starr Foundation. After Mr. Starr passed away in 1968, he began serving as the President of the Starr Foundation until March 1999. He remained as an active Director of the Foundation after retirement. He was a strong advocate for the C.V. Starr East Asian Library at both Columbia University and the University of California Berkeley. On December 27, 2015, T.C. Hsu passed away in New York at the age of 97.